The Military Press is an extremely useful exercise for developing shoulders’ muscles.

In the video, to simplify, I refer to deltoids  but actually in this exercise are involved dozens of other very important muscles (among others, the triceps brachial and all the muscles involved in the movements of the scapula).

Over the years, the Military Press has been forgotten by many athletes because considered too dangerous. As always I consider wrong pointing the finger at a single exercise without regarding to who was proposed and how it has been proposed (in the gyms you see awful executions…) However, there are people who would do better to avoid any form of loosening over the head.

Generally I do not suggest the Military Press to people with problems to their shoulders, back or cervical column: if you belong to this category, I invite you to try one of the optional exercises that I show in the next video.

Below the proper performance.

To properly grab the band, make sure to keep your feet wide as your shoulders and to form a rectangle with the Loop Band so that the opposite sides of the rectangle have the same tension. After some tests you will figure out how to do it. 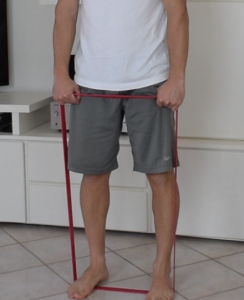 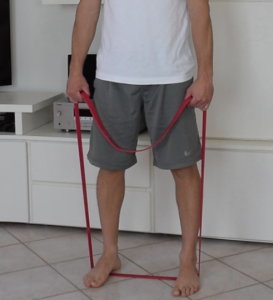 Too much tension on the  rectangle “long” sides

Then perform the “turn” of the band in order to have the Loop Band at the height if your neck and your elbows within the band. 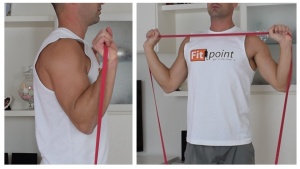 Keeping your abs tense and yor legs straight or slightly bent, push your arms upwards and outwards until fully extended.

If you want to emphasize the work on your lower limbs you can try to do the Squat Press, similar exercise to the Military Press where you can use a heavier load.

To safely perform both the exercises, I recommend you to warm-up your shoulders, perhaps with this routine, and to perform a first test set with a Loop Band 13mm or a microband 6mm.

Did you like this exercise?
Would you have ever said that a simple Loop Band may be more effective than a barbell? If you want to discover the thousands of  uses permitted by this tool, subscribe to one of our specialisation courses for personal trainer and enthusiasts.