The Triceps-squeezer routine is a combination of two exercises to be performed in super-set.
Pratically,  8/10 repetitions of the first exercise are performed and, without resting, other 8/10 reps of the second exercise. After that, you rest the determined time (2″/3″) and you repeat the circuit for a specific number of times.

Before looking at the exercises, in order to better understand thei logical sense, read this article about the triceps brachial muscle and its function, if not already done.

Once you have learned these notions, you will be able to easily understand why a single exercise cannot develop a muscle fully.

Before performing the routine, I recommend you to learn individually the two exercises, which are: lunge shoulders’ extension and standing Wrists’ extension.

In this movement, the torso is upright and the abs “active”. If you hold the position properly, you may feel a pleasant sensation of stretching  near your thigh front muscles (that one corresponding to the knee on the floor).

The front leg’s knee never exceeds your toes, however, while pulling the band, it should be pushed forward as to oppose to your pull (this important trick makes the exercise more interesting from a functional point of view). 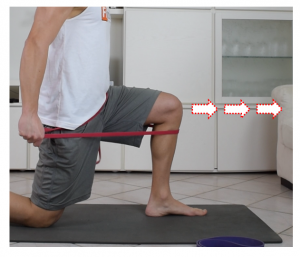 Breathing pull the band with both your arms, keeping them a little bit bent (not completely straight!).

To make the exercise really effective, you need to pay close attention also to the tempo, that in this case is 1-0-1-2.

(Do not be scared of this formula, apparently ucleear, remember that each exercise can be split in two phases: one in which you pull the band and one in which you let it go. The first phase is called “concentric” or “positive”, the second one “eccentric” or “negative”).

The pictures below can help you better understand.

The lettering 1-0-1-2 means that you must follow this pace:

In the second exercise you need to pay attention to fix the band at your higher back (and not at the neck); if you feel pain at your neck during the exercise, this means that you have not yet learned the proper set up.

(in this case, if you have the possibility, I would recommend you to invest some euros in a session with a qualified Fit Point Loop Band Trainer).

With your legs slightly bent, stretch your arms to your hips expanding your torso against the band. Pratically you should “open” your chest upwards.

It will be hard to do while breathing out. 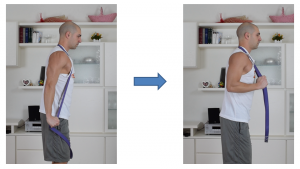 …it’s clear: doing a triceps squeezer with these overloads you should be really strong!

Did you like these exercises?
Would you have ever said that with two simple Loop Band you could combine two effective works? If you want to discover the thousands of  uses permitted by this tool, subscribe to one of our specialisation courses for personal trainer and enthusiasts..