In this article I’m explaining some variants of the last week exercise, the one arm rowing.

All you need is a towel, and of course one of our  Loop Bands® that you can choose according to your strength level.

The towel  may be useful for a confortable grip.

In this first exercise you will need to pay attention to the same details dealt in the  one arm rowing: a correct tensioning of the band, the position of the torso and the elbows.

The position to be held is that one of a half squat, so the lower limbs are semi-bent, the torso upright and slightly leaned forward.

During the set, it comes naturally to you “raise up”, therefore focus your attention on the position to hold throughout the set. If you work correctly, strange as it may seem, it could happen that you feel working your legs muscles too.
Pull holding your breath, exhale when your elbows are in part to your torso, breathe in when you let the band go by straightening your arms.

The Loop Band is connected at the height of your knee.

(if you do not remember what I mean with “tempo”, read this article once again)

The same exercise can be performed sitting by binding a Loop Band always around 40 cm from the floor (like in the previous exercise).

In both exercises pay attention to hold your torso in the proper position. In order to understand how to do it, learn to distinguish these two movements which can often be confused.

1. Shoulders’ anteposition (to be avoided) 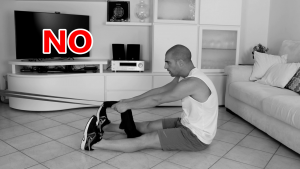 2. Flexion-extension of the torso (permitted)

With your scapulae adducted and depressed (shoulders backward and downward), perform an extension of the torso moving from the position in photo 2 to the position of photo 3. Then go on pulling the towel. 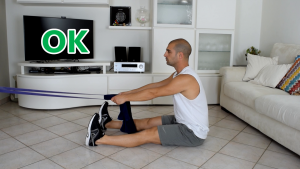 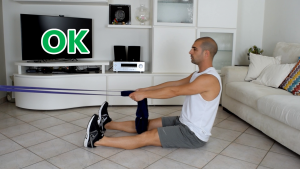 The flexion/extension of the torso can also be dismissed, but in my opinion is useful to give push and harmony to the whole movement, as long as it is performed properly.

You can perform a third variant by lying down with a Loop Band 21mm bound around 15 cm from the floor.

When you grab the band, lie down by making sure that it is slightly under tension once you reach the starting position. 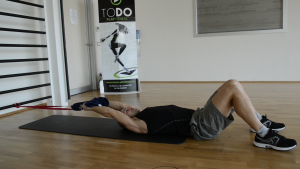 Keep your feet on the floor, your knee bent and your head in contact with the floor in neutral position (you can also use a pillow if  it is more comfortable).

The exercise is to bring your hands on your thighs by pulling the band with your arms which are straight at the beginning of the exercise, but they bend slightly while pushing.

Did you like these exercises?
Would you have ever said that a simple Loop Band may be so effective? If you want to discover the thousands of  uses permitted by this tool, subscribe to one of our specialisation courses for personal trainer and enthusiasts.