The biceps-squeezer routine is a combination of two exercises to be performed in super-set, that is one after the other. Unlike the triceps-squeezer routine, here you do 5/6 repetitions of the first exercise and, without resting, other 8/10 reps of the second exercise. Then you rest the prescribed time (2/3′) and you repeat the circuit for a specific number of time.

Before trying the routine as it is showed, I recommend you to learn really well the two exercises individually.

Super Curl  is a wonderful exercise for arms. Watching the video of the exercise, you may smile ironically but I assure you that, if you perform it right, at the end of a set of 10 reps you should cry.

For this reason I suggest not to exceed 5/6 reps, even because it is good to combine it with a more complete movement, since it is a partial movement through which you cannot reach the maximum muscle shortening.

In order to perform properly the Super Curl, you should be good in taking care of two aspects:

At the beginning of the movement the grip is neutral, bending your arms you will have to rotate your wrists by turning your palms upwards.

Starting phase of the movement

Final phase of the movement

2) the position of the Loop Band

It is important to place the Loop Band in order to create a double force line: one horizontal and one vertical. (actually they are both slightly inclined, however allow me this explanation to make a clear distinction).

The horizontal force line may be used by leaning our pelvis backward and downward, and it allows us to make our biceps work, stimulating their function of shoulders flexor.

By working against the vertical force line, we will stimulate the well-known function of biceps: the elbow flexion.

More simply, to make sure if the band is fixed properly…will be the feeling of  “pump” that you will perceive on your biceps.

The “tempo” of the exercise is very important, in this case is 1-1-2-3, therefore you need to follow this pace:

In this video I am using a  Loop Band 21mm  but if you are a beginner a Loop Band 13mm will be enough.

The fist curl is very similar to the hammer curl but you do not have to confuse them since in the first exercise the grip is not always neutral but, at the beginning of the movement, is supinated.

This technical detail concerning the grip allows you to pre-stretch your biceps brachii by taking a bit of work away form other muscles (brachialis and brachioradialis).

While bending your arm you will need to rotate your wrists pushing the loop band with your fists. Remember that your elbows are not locked in part to the elbows, but they move a bit forward.

The following images help you better understand the correct position. 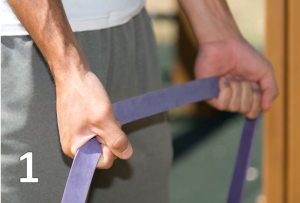 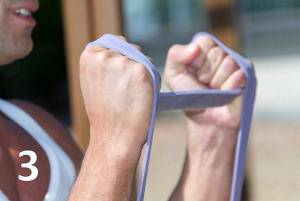 In this second exercise, in which you keep the time 1-0-1-1, you should pay close attention to keep you abs active without archin your lower back. for my experience, I would say that in the curl with Loop Band is really easy to make this mistake.

In the case you are not sure I will suggest you to ask for help to one of my Loop Band Trainer.

Approximately you can do 5/6 repetitions of the first exercise immediately followed by  10 reps of the second exercise. A recovery of 2/3‘ will allow you to move to the next set.

Would you have ever said that with two simple Loop Bands you may create a so effective work combination? If you want to discover the thousands of  uses permitted by this tool, subscribe to one of our specialisation courses for personal trainer and enthusiasts.