One of the most popular exercises at the gym is the crunch, a movement which allows to train the rectus abdominis muscle by raising, supine, the upper body toward the pelvis.

There are basically two limits to this exercise:

1- adding an overload is hard;

A solution to these problems is the Alpha Crunch, exercise to be performed with a single Loop Band and without any point of connection.

If you are not a Personal Trainer, the best way to learn this exercise is to ask to a qualified Loop Band Trainer  who can teach you the proper and best technique.

(Check where is the closest Loop Band Trainer )

If you cannot find a Loop Band Trainer, do not worry: with some activity you will mange to learn the Alpha Crunch proper technique. . However, you must pay close attention to three main aspects: the correct tension of the Loop Band, the movement’s speed and the head’s postion.

1-Correct tension of the Loop Band In addition to the video’s explanation, it is really important to apply power to the Loop Band properly. Try to imagine that the Loop Band forms a triangle (photo A) with one base and two sides.

While preparing for the exercise, you will have to grab the loop with the part of your hand’s palm closest to your wrist (photo B), bringing under tension the sides of the triangle rather than the base.

In order to position the Loop right, follow the progrression in photo C: first, straight your arms upwards (photo C1), then open them outwards (photo C2), at last rest your head on the band (photo C3) and close slightly your arms.

IMPORTANT! While performing crunches, you must push with the outer palm of  your hand (the one closest to your little finger) and not with the internal one. It is a little detail that makes a big difference. 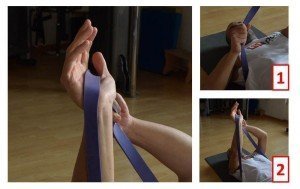 Photo B – Loop Band against the palm’s hand.

You will notice to be properly positioned if the sides and the base have the same tension while extending your arms and opening them outwards (photo C).

Remember! The more the sides are under tension, the more the load increases and the exercise gets harder.

If the sides are not under tension by grabbing them too high, the base will be too much under tension and you will not be able to open the arms and rest your head on them (photo D). 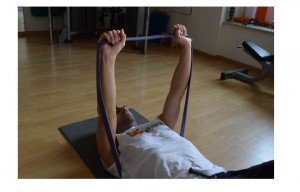 2-Movement’s speed It should never be too high, indeed… I had to speed up the video playback (because of scenic requirements), then try to imagine the same exercise performed even slower than the one in the video.

In all stages of the movement, the speed should be low and the pace really controlled.  You need literally to feel and appreciate every single cm of range.

3-Head’s position  The band should be leaned against the occipital bone, which is the lower part of the skull and not the neck.

People with a lot of hair may feel the Loop Band slip away: to fix this situation, bring a towel and wrap it around the band, or simply place it behind your head.

(A/N: I also have a lot of hair but i shave only to perform this exercise easier).

During the concentric phase of the exercise may be a good idea to apply a light pressure of the head against the Loop Band.

The Alpha Crunch can be obviously performed in different ways, (for example) another version is to perform the exercisee on a bench by passing part of the band under the bench.  It is a really challenging version I do not recommend to who has not yet acquired a good familiarity with the version explained here.

Additional versions concern the legs’ position (straight, bent, leaned or not on the floor and the inclination of the bench).

Did you like this exercise?  Would you have ever said that a simple Loop Band could solve a so frequent and annoying problem? If you want to discover the thousands of  uses permitted by this tool, subscribe to one of our specialisation courses for personal trainer and enthusiasts.